Quality assurance measurements ensure that the machine generates just as much X-ray as needed to keep radiation exposure as low as possible to achieve good quality imaging and avoid repeated procedures. Quality assurance testing is done for the safety of both patients and staff. It also enables predictive maintenance, and can help extend the lifetime of the machine.

Radiography is a widely accepted examination procedure to achieve static images of the internal body parts. The quality of static images are usually of higher quality compared to the dynamic fluoroscopy method.
Radiography is also a common method for non-destructive testing in industry applications.

Dose, time, kvP, and sometimes Half Value Layer (HVL).
A physicist may in addition perform constancy testing, and check mAs/dose linearity.
A service engineer may check mAs invasively on the machine.

For comprehensive analysis use the RaySafe View software.

Watch how-to-video:
How to measure with the RaySafe X2 R/F Sensor

Quality assurance testing should be done according to local guidelines, national or international recognized standards, and manufacturer recommendations. Some example of standards are AAPM (the US), IEC 60601-2-43 to IEC 60601-2-65, 61223-2 (constancy testing), and 61223-3 (acceptance testing).

A phantom can be used to simulate the body of a patient during an exposure, to enable authentic measurements of greyscale, resolution etc in order to receive images of good quality during a real procedure.

To support your measurements, you can use the RaySafe Excel template. 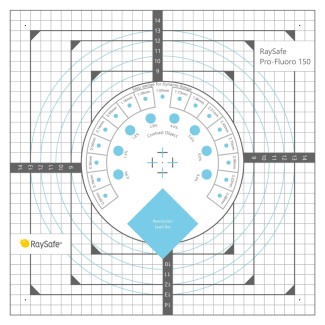 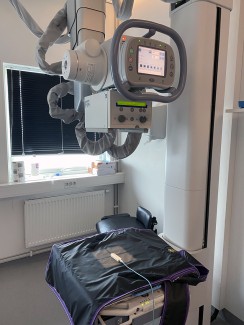 The history of radiography

Wilhelm Röntgen stumbled on X-rays in late 1895 while doing some experiments on cathode rays in tubes. He called them radiation “X”, to indicate that it was a new type of radiation. The discovery was a sensation. The name stuck, despite Röntgen’s objections. Many of his colleagues suggested to call them Röntgen rays. Both names are still used.

Röntgen realized the potential of the medical usage when he made a picture of his wife’s hand on a photographic plate. It was the first image of a human body part using X-rays. When seeing it she said “I have seen my death”.

The first use of X-rays under clinical conditions was by John Hall-Edwards in Birmingham, England on January 11 1896, when he radiographed a needle stuck in the hand of an associate. On February 14, 1896, Hall-Edwards was also the first to use X-rays in a surgical operation.

Want to get a demo and pricing on the RaySafe X2 R/F?